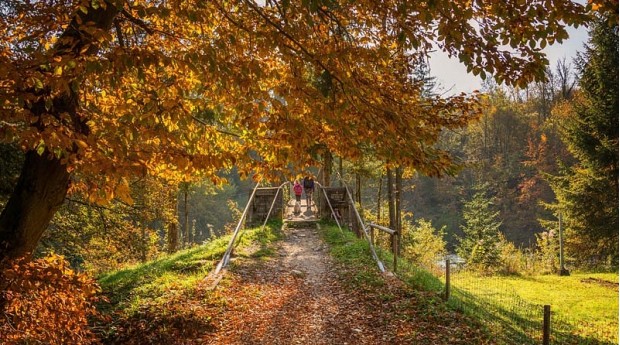 Hiking Holidays for Little Ones in Radol'ca 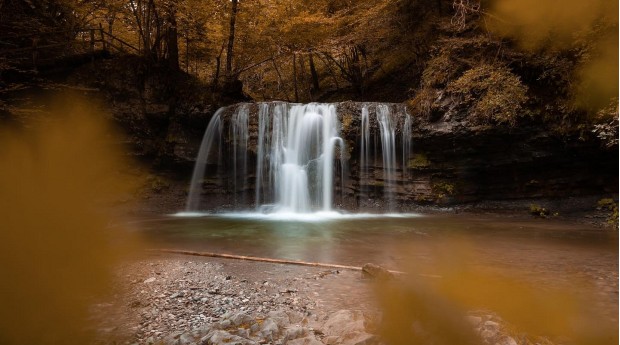 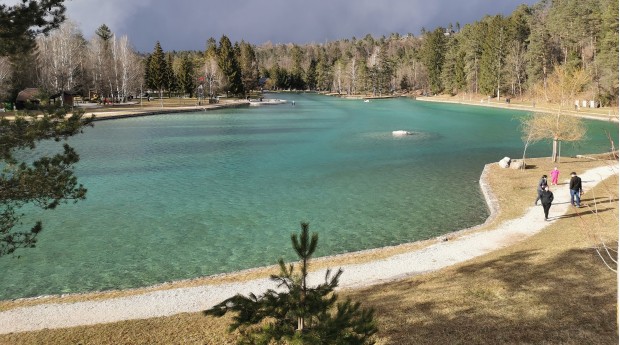 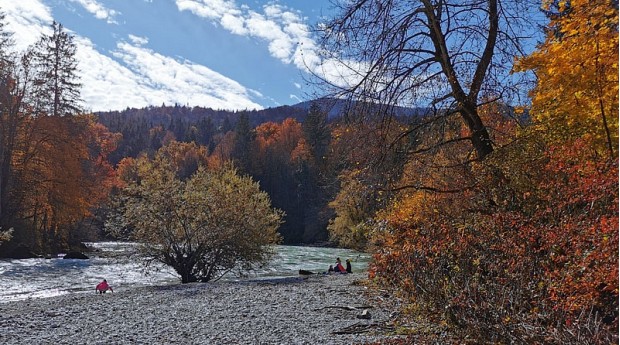 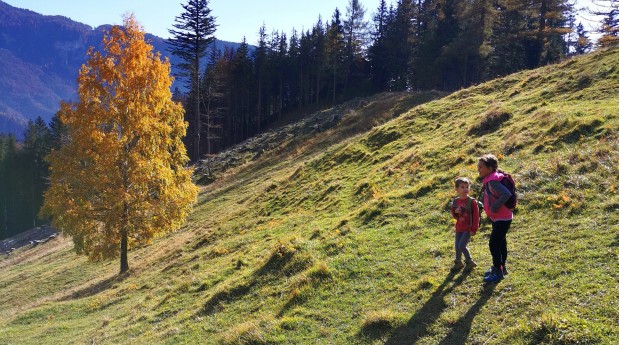 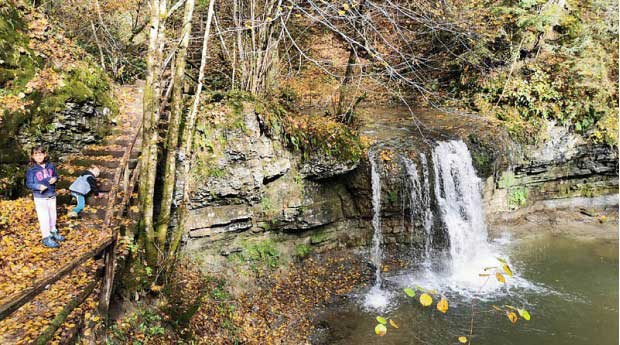 We weren't bored at all, even though many of you might think quite the opposite. We spent most of the time hiking, and with our average four-year old and seven-year old 'little hikers', we had plenty of choice of family half-day hiking tours in Radovljica and the surroundings.

We hiked these trails in the municipality of Radovljica:

We mainly wanted to ensure that the trails were varied enough to keep the children interested for several days, therefore some of the trails we chose were somewhat harder uphill hikes, while others were easier, flatter trails, with a few added attractions along the way too!

For example, the one-hour walk to the Peračica waterfall on the Brezje Path of Peace was interesting in itself due to the numerous little footbridges. If my seven-year is to be believed, there were over 20 of them one way!

The Brezje Path of Peace leads across numerous footbridges to a picturesque waterfall.

The Begunje Lamberg Trail, which we walked from the Krpin recreation ground to Kamen Castle, is also a winner with our youngest, since he is fascinated by castles.

You can visit Kamen Castle on a walk along the Lambergh Trail from the Krpin recreation centre or from the centre of Begunje na Gorenjskem. Photo: Jošt Gantar

We had already walked some of the trails in the past, while the Brezje Path of Peace and the hike to the Planinca mountain pasture, to where we set off on foot from Gostišče Draga, were totally new ones for the kids.

The Planinca mountain pasture above the Draga valley is at the halfway point of the trail to the more well-known Roblekov dom mountain hut.

Each hike took us from around an hour to two hours each way. In the case of the Lambergh Trail and the Brezje Path of Peace – both of which are circular theme trails – we actually walked back the same way as it was more interesting for the children and also avoided walking on the road.

As we live in Lesce, we, of course, headed to the Šobec camp on foot. You can do a circular walk by setting off along the road Finžgarjeva ulica and following the signs for Šobec, and to return, you can take the gravel road from the camp up to the Plana settlement. For those starting from Radovljica, you can follow part of the Juliana long-distance hiking trail, which leads alongside the Sava river.

The Šobec natural pool and the entire area of the camp is a pleasant place for a walk from early autumn to late spring; in summer it is a bathing pool and camp.

Šobec, which during summer is first and foremost a camp, is really a great place for a walk during the remaining months of the year, though in summer that isn't the case since the camp's guests like their peace and quiet, which is totally understandable, hence we tend to visit regularly from early autumn to late spring. The kids have a favourite playground there too, which is currently closed due to the pandemic, but, thankfully, the kids totally understood and accepted this. The other favourite place in the camp is the sandbank on the banks of the Sava Dolinka river.

One of the most popular parts of the Šobec camp is the sandbank beside the Sava Dolinka river.

Due to having relatives in Kamna Gorica, we have already walked the trail from Radovljica to Kamna Gorica – either there or back – on numerous occasions. This time, however, collecting stones beside the Sava river for an afternoon of painting was additional motivation. You can walk the entire trail, which between Radovljica and the last junction of paths in the forest before reaching Kamna Gorica is part of the Lipnica Castle Natural Science Trail and visit the village of Kamna Gorica aswell.

The fairytale autumn forest on the Lipnica Castle Natural Science Trail between the Fux footbridge and Kamna Gorica.

Or you can make it a circular walk by walking from Radovljica to the Sava river on the above-mentioned trail and shortly after crossing the Fux footbridge take the path on the right and follow the signs for the Sava River Trail, which you follow all the way to the bridge over the Sava river at Lancovo. From there, simply cross the bridge and head back up towards Radovljica on the road Cesta Svobode.

A walk along the entire Lipnica Castle Natural Science Trail is also great and will lead you to the ruins of Lipnica Castle above the village of Zgornja Lipnica, from where there are wonderful views towards Mt. Triglav.

In addition to the above-mentioned trails, the trails below are also ideal for children:

Due to the government's decision to extend the school holidays as part of the COVID-19 preventative measures, we now have another week ahead of us. So, plenty of time to visit these other places, which, whilst we are already familiar with them, we have yet to visit them during autumn.

This time the Radol'ca Challenge will provide us with additional motivation. During the first week of the school holidays we succeeded in completing almost half of the ten tasks. If you haven't made a start on the challenge yet, don't worry, there's still plenty of time, since the challenge is open until the end of February, so be sure to join in to be in with a chance of winning a great prize!

For those of you who don't live in the municipality of Radovljica and therefore can't currently come here, don't worry, all the above-mentioned paths and trails will be here waiting for you in spring or some other time next year, so be sure to add Radol'ca to your list of places to visit at the end of the pandemic and aim to walk them at that time! 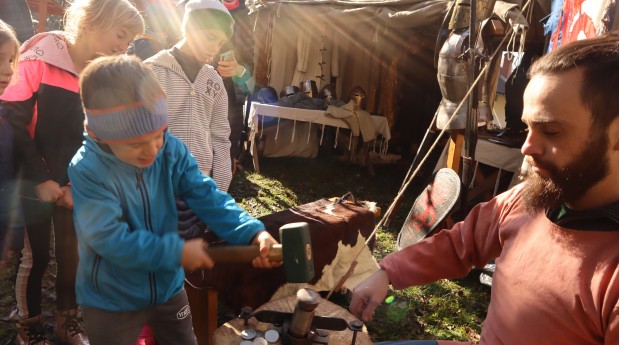 A varied and interesting autumn programme between 28th October and 5th November will spice up the autumn school holidays in Radovljica. 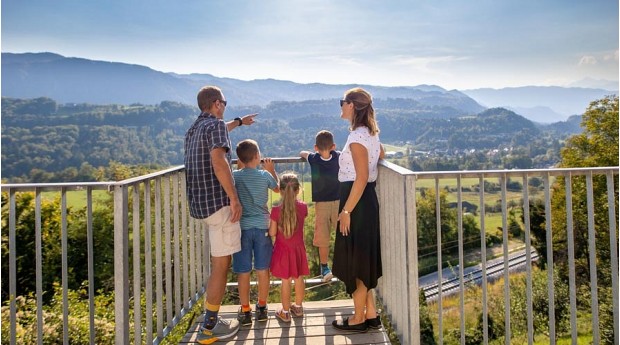 A family outing: By train to Radovljica!
By train on a great family day!

With its range of attractions and the accessibility of its theme trails, Radovljica has become a popular family destination. If you arrive here by train, your children will enjoy the adventure even more! 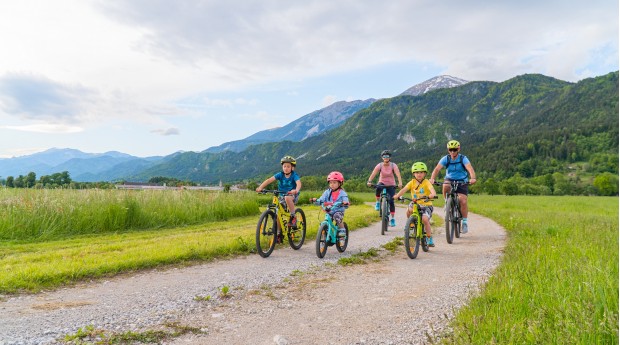 Family Cycling Day in Radovljica
A family cycling trip which, together with activities along the way, will keep you entertained for the entire day

This family cycle route is the ideal way to spend an active, family day in Radovljica! In addition to cycling, along the way you can stop at the unique children's playground in Krpin, try your hand at a round of mini golf, and enjoy some of the area's excellent cuisine. 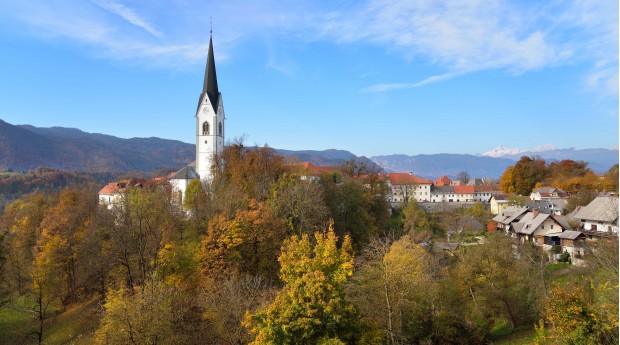 An autumn trip to Radol'ca
Nature, culture and excellent cuisine

Autumn is a wonderful time to explore Slovenia, whether for outdoor activities or learning about cultural heritage, and not forgetting a visit to great restaurants. Below you can read our latest suggestions for an autumn trip in the surroundings of Radovljica.