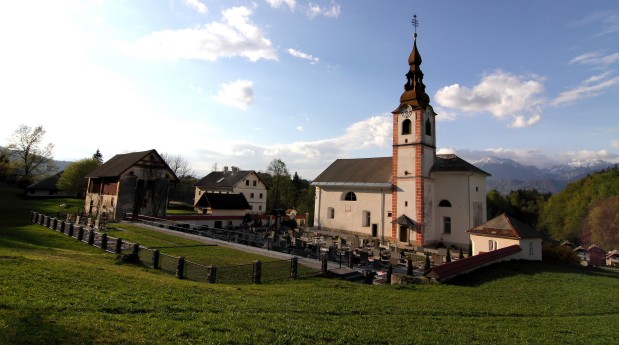 The Church of the Holy Trinity above the iron forging village of Kamna Gorica is opulently decorated.  Its position above the village affords excellent views of the village, across woodlands and all the way to the peaks of Stol and Begunščica in the Karavanke range.

In close proximity to the church is the Sexton’s Museum House, which houses the local museum.

The church can be reached on foot from the central village square by the linden tree. The stone stairway, with some 100 steps, begins between the houses numbered Kamna Gorica 37 and 48. A road leads to the church from the western side of the village.

The interior has a rectangular floorplan and is fitted and painted in the neo-Renaissance style. The main altar dates from 1863 and is the work of Janez Vurnik, a stonemason and artist from Radovljica. In the niche there is a painting of the Holy Trinity, whilst the side altars feature statues of St. Andrew, St. Peter, St. Paul and St. Bartholomew.

Originally there were only two side altars in the church with pictures depicting St. Barbara, the protector of miners, and St. Florian, the protector of firefighters and the intessesor against fires. The paintings are the work of Valentine Metzinger, the most important Baroque artist in Slovenia. On the altar tables of the side altars there are paintings of the Mother of God, the work of the local artist Matevž Langus, and St. Joseph, possibly also the work of the same artist. When the church was enlarged in 1754 an additional altar of the Immaculate Heart of Mary was added, as well as the altar to St. Joseph – both the work of Janez Vurnik dating from 1860. The pulpit dates from the late-Baroque period.

The church organ is the work of the brothers Ignac and Ivan Zupan, organ masters, who lived and worked in Kamna Gorica.

The wrought iron chandelier is the work of the Kropa artistic blacksmith Joža Bertoncelj. 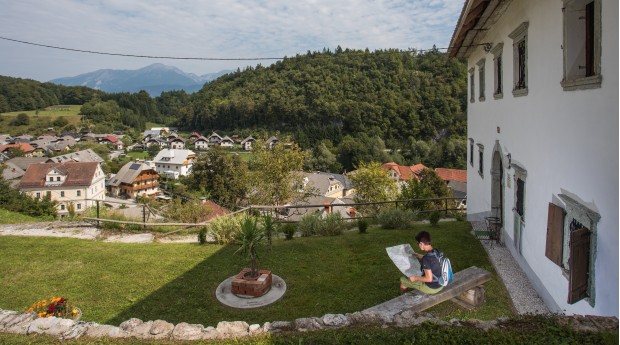