The Romanesque basilica with Gothic and Baroque modifications has preserved frescoes dating from the 15th century. The St. Andrew's parish church is surrounded by old farmhouses and today is still the focal point of the village of Mošnje.

A WEALTH OF 15TH CENTURY PAINTINGS

The aesthetic value of the church in Mošnje is hidden in its interior. It has partly preserved Gothic wall paintings.

In the presbytery there are frescoes by a master artist from Žirovnica  that date from the mid-15th century. The scenes of martyrs and apostles are preserved. The master based them on woodcuttings that originated in Basel around the year 1445, which were widespread in Europe but are now lost.

The area of the altar on the northern side of the nave was painted by an unknown artist in the second half of the 15th century, following in the tradition of the Master of Bohinj presbytery. The ribbed vaults are decorated, and in the arches there are pictures of angels, together with those of St. Magdalene and St. Helen.

The wall frescoes are only partly preserved, as they are covered by the altar that was later built in. Only the image of a kneeling man, probably the patron, is preserved.

The first mention of St. Andrew's church in Mošnje dates back to 1154, when the church was already standing. Its front facade is simple, without excessive embellishments, but with a beautiful entrance portal from Peračica tuff. On the exterior of the presbytery and bell tower there are preserved frescoes. The magnificent 15th century image of St. Christopher – to whom prayers were said for protection from sudden death - has been restored. People believed that if you saw his image in the morning, they would be saved from sudden death that day.

The architecture of the church and its paintings are quite diverse. The church is a three-nave Romanesque basilica with an elevated central nave and lower side naves. During the Gothic period a bell tower and the sacristy of the Holy Trinity were added, where today there is a vestry, as well as a presbytery. At that time the side naves were also raised. In the Baroque period the presbytery was raised, which is reflected in the preserved Gothic frescoes. The church has five altars.

On reaching Mošnje you are greeted by two equestrian centres on one side of the road, and on the other by Vila Podvin, which satisfies even the most demanding of gourmets. 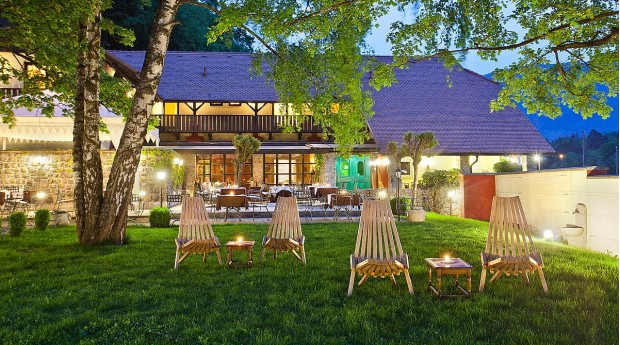 The culinary delights at Vila Podvin, which is surrounded by a spacious garden, are created by one of Slovenia's finest chefs, Uroš Štefelin.

Thursday's tales from the countryside
Every Thursday in July & August

Every Thursday in July & August

Listen to tales of Slovenian countryside and visit the national shrine of Mary Help of Christians in Brezje. Explore the ruins of the mighty Kamen Castle and mysterious archaeological sights.